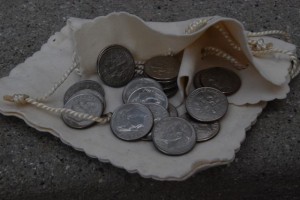 You probably know that Franklin D. Roosevelt’s profile is the image emblazoned on the front of the US dime. But, the greater question is…do you know why?

When FDR was 39 years old, he was vacationing with his family at their summer home near New Brunswick, Canada. After falling in the water during an afternoon of sailing, he returned to the house feeling chilled and exhausted. Within two days, his condition turned from bad to worse–“my left leg lagged…it refused to work, and then the other.” By the third day, he had difficulty standing or moving his legs at all and he was in a great amount of pain. When his arms, back and hands began experiencing partial paralysis, the doctors were finally able to make a correct diagnosis. Polio. FDR could expect to spend the rest of his life without the proper use of his legs.

As would be expected, FDR was devastated. He saw his political aspirations squashed in a matter of days. It took him a period of time to get through his depression, but finally he did. He worked at rehabilitation centers with other “polios” (as they were called) to learn how to walk with heavy metal braces. Whenever he was in public, he wore these braces under his pants and kept a calm presence about his face even though he was in excruciating pain. Of this time, he said, “Once you’ve spent two years trying to wiggle one toe, everything is in proportion.”

Roosevelt knew that if he wanted to be elected to a public office, he had to reassure the voters through his public appearances that he was healthy and well-suited for the job. His performances worked and through his charismatic personality, he succeeded in being elected the Governor of New York just seven years after he was afflicted with the disease and then the nation’s first four-term President four years after that. FDR is definitely an example of a man who didn’t let adversity stand in the way of his dreams.

So, why the dime? President Roosevelt helped found the March of Dimes in 1937. This organization encouraged people to send in their dimes to aid in scientific research for a polio vaccine. This fundraising drive culminated every year on FDR’s birthday, January 30th. Because of all of his work with this organization, it only made sense that Congress would choose to include his image on the dime after his death in April 1945.

Unfortunately, FDR didn’t see the fruits of his labors with the March of Dimes. It wasn’t until 1953 (8 years after FDR’s death) that Dr. Jonas Salk of the University of Pittsburgh finally found success. He discovered the vaccine that would save the country and the world from the devastating affects of polio…. and most of his funding came from the March of Dimes.