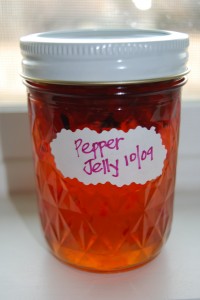 Last fall, I went to a friend’s party and enjoyed a new and delightful appetizer: a spicy, sweet gelatin-type sauce over cream cheese served with crackers. I had originally thought it was salsa, but then found out after asking my friend that it was something called Pepper Jelly. I had never heard of this before. What exactly was Pepper Jelly?

As soon as I returned home, I started researching different recipes online. I tried out a variety of combinations before I came up with my own version. In the end, I was quite happy with the final result.

In years past, I had made salsas from the bell peppers and hot peppers in my vegetable garden. But this year it was fun to try something new. I found that I could make a lot more Pepper Jelly with my peppers than I could salsa which helped stretch my harvest even farther.

It’s been a fun gift to give to friends (for Christmas or whatever) and also a yummy appetizer to bring to potlucks.

Best of all, it’s super easy and fairly inexpensive to make.

3/4 cup chopped bell peppers (use whatever color you want)

Make sure jars are clean and sterilized. Then, place lids in a small pan of boiling water on stovetop. Leave them in the boiling water until you’re ready to seal the jars.

1. In a large pot, place all ingredients except for Certo. Bring to a rolling boil. Boil for 4 minutes then take off heat.

2. Add Certo quickly. Stir. Bring back to a rolling boil for 1 1/2 minutes. Turn off heat.

1. Pour jelly into jelly jars about 1/8 inch from top.

2. Wipe the rims of the jars with a damp paper towel to make sure no jelly residue is left on the rims.

3. Take the lids out of boiling water with tongs. Place lids on the jars and use rings to tighten into place.

Jelly jars should seal on their own as the jelly cools so you can keep them on the shelf. If not, you’ll have to keep it in the refrigerator. You’ll know if they are sealed if the lid doesn’t pop back up when you press the center of it.

NOTE: If you want your jelly spicier (or less spicy), adjust the amounts of spicy and bell peppers from above.

To serve: pour over a square of cream cheese and serve with crackers.