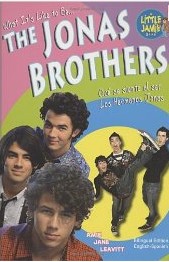 I really enjoyed researching and writing this book on teen/tween music sensations, the Jonas Brothers. I watched interviews, youtube videos, and music videos and read newspaper and magazine interviews and just about everything I could get my hands on in relation to these fab siblings. Then, I even got to go see them in concert which was especially exciting. It was fun listening to all of the little girls screaming when the Jonas Bros took the stage and it was even more entertaining to realize that I was one of the many fans who was singing along to their lyrics. My friends were uh…well…let’s just say…impressed. 🙂

This book is a day-in-the-life of the Jonas Brothers. It explains what their life is like from sunup to sundown: when and how they go to school, when they fit in time for homework and music practice, what they like to eat for meals, and what they do in their very limited free time. For this book, and the one on Miley Cyrus, my good friend, Don Osmond, Jr., gave me an insight into what a typical daily life of an entertainer is really like. His help in that regard was very much appreciated.

A special feature of this book: It’s written in both English and Spanish.

What’s on the back cover: It was six-year-old Nick’s role in a Broadway show that got the Jonas Brothers to start thinking about performing together. By 2005, the three brothers began to travel the world, performing their music for their fans. They have become so well known that fans come screaming out of buildings when they catch a glimpse of them! Join Kevin, Joe, and Nick on a typical day’s journey and find out just what it’s like to be the Jonas Brothers.