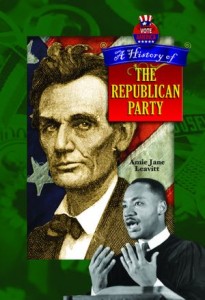 The History of the Republican Party —  set to be available for purchase on June 15, 2012.

At first, this book was a very difficult one to research and write. For some reason, I was having a lot of difficulty finding the information I needed for each chapter opener. Then, something clicked. I was able to locate a bunch of FANTASTIC primary sources that made the research process SO much fun.

For example, in the first chapter I describe a special debate between two politicians who end up later being revealed as (spoiler alert) Abraham Lincoln and Stephen A. Douglas. In order to write this, I wanted everything just right. I wanted to know how they were dressed, what the weather was like that day, and where the debate actually took place. Well…I found all of that information in a newspaper account written by a journalist who was actually there and described precisely what he saw and heard that day.

Every other chapter opener in this book was written using similar firsthand accounts. For instance, for the chapter on President Eisenhower, I actually found the official military report that he was asked to make about his experience on the Truck Convoy. It was a scanned in document that I found on the Eisenhower Library’s website.

It was during this process of researching this book that I gained a true love and appreciation for primary source material. It is SO fascinating to read the accounts of people who actually witnessed an event. It just helps you feel like you have stepped back in time and are witnessing it right there by their side. SO amazing!

Along with the primary source info, it was also fun finding the party’s platform information for the various election years. It was interesting to see how much things have changed over time with both of the parties. If you’re interested in checking this out for yourself, head on over to this link:

There is such an amazing amount of fabulous information available online. With a few keystrokes on a keyboard and a click or two of a mouse, we have the ability to find treasure troves of information on just about every subject.  We truly live in a fascinating time in the history of the world!