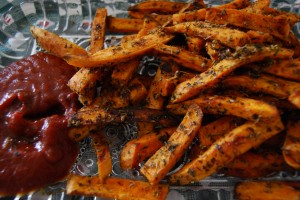 Last summer, I went to a restaurant in Sugarhouse called Au Naturale. I absolutely adored their sweet potato fries and homemade ketchup and decided right then and there that I must learn how to recreate them at home. Then, instead of having to drive into Sugarhouse, I’d be able to have them whenever I wanted.

After trying out several different recipes online over the last few months, voila, I finally came up with my own version. They’re easy and inexpensive to make and according to this article in Self Magazine (Recipe Roundup: The Sweet Potato Perfect Skin Connection), they’re great for your health too.