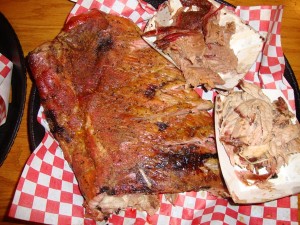 Tonight after yoga, I went out with a good friend of mine to the Smokehouse Pizza & BBQ–the new location on Univ Ave. I was a little concerned that the BBQ wouldn’t be up-to-par since my friend–who’s a southern boy–would have very discriminating tastes and I was the one who suggested this restaurant. Eeek.

However, we were both pleasantly surprised with the platter of ‘que that we ordered to share. The ribs were so tender that when we picked them up, the meat literally fell off the bone and dropped back onto the platter. Ummm..yeah! And, another benefit to the barbecue is that they use a dry rub on the meat. This lets you flavor it on your own with the house’s sweet or spicy barbecue sauce instead of having the meat swimming in sauce when it comes to your table. We both agreed that this was our favorite way to have barbecue prepared.

Our enormous platter of barbecue would have been plenty to share, but the meal also came with four sides! Count ’em, four. We got a huge basket of fries, mashed potatoes, mac n’ cheese, and baked beans. The only thing that would’ve been better is if they’d had sweet potato fries instead–but, hey, you can’t ask for everything.

Yeah, it’s a good thing I went to yoga tonight. I only hope my metabolism was still burning at warp speed while I was eating this ginormous meal.  If not, there’s always the treadmill tomorrow. 🙂

I highly recommend the Smokehouse. I know my friend and I will definitely be back. For those of you familiar with the Provo area, there are two locations: one in Provo and the other in Orem. Not sure about the Orem location, but the Provo restaurant is owned by the guy who owns Los Hermanos next door.