The Bill of Rights in Translation 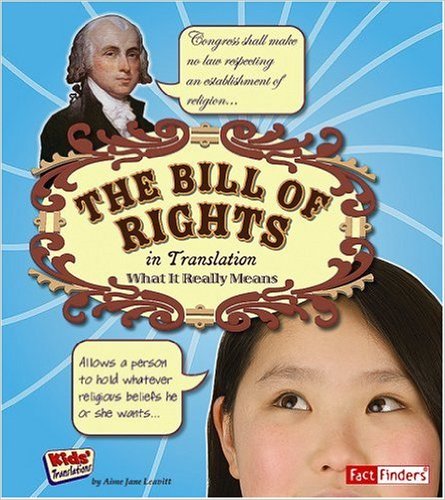 The Bill of Rights in Translation.

Bruce rated it  I really liked it!
A lively translation of the American Bill of Rights for fourth graders. The original text is paraphrased into simpler English. For example the third amendment is shown on page 8 with its original text, a colored illustration, and definitions of the words infringed and militia. On the facing page 9 it’s “translated” as “Soldiers can’t barge in and demand to live in your house and eat your food.” Under the phrase “barge in” there is a graphic call out to a text box that reads, “If British soldiers demanded it, colonists had to let them sleep in their beds and eat their food. This was called quartering soldiers.” Below the text box is a small, labeled illustration of “the Quartering Act of 1774.” This is followed by a short history of the writing of the Constitution and the writing and approval by the states, followed by a timeline, two short glossaries, a bibliography and index.

Jessica rated it  I really liked it!
A good introduction to an important topic for all Americans to be familiar with. I got my son this book from Scholastic recently because he’d been asking about what his rights are as an American, and to help him fulfill the requirements of his Webelos Citizen badge. The translations are good: simple and fairly noncontroversial, for a topic as challenging as an interpretation of the Bill of Rights. They also caught his interest as he went along, even though he’d been reluctant to read it when we first began, as the book helped him realize why these things are so important anyway.