The Battle of the Alamo: An Interactive History Adventure 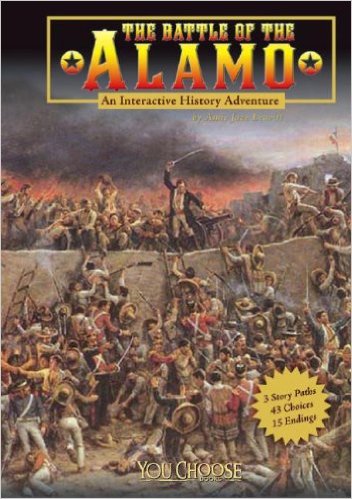 The Battle of the Alamo: An Interactive History Adventure.

Reed S rated it  I liked it!

A few days ago I started reading The Battle Of The Alamo By: Amie Jane Leavitt This book is very touching and exiting because many soldiers die, but at the same time they fight until they have no energy left.My favorite person in this story is William B. Travis because he really takes charge of helping every single person that is in the Alamo. The battle of the Alamo was a fight between Texas independence from Mexico. The Texans did not like the laws of Mexico that was the reason the battle was caused. A part in the story that is very suspenseful is when is William B. Travis draws a line in the sand with his sword and says “If you want to die and fight for the Alamo then step across this line and everyone does, witch made me want to go fight in the Military. If you like history books that have a lot of interesting things then you should read this book.

In this edition of the “You Choose Books” readers can discover historical events through making decisions and finding out what would have happened if they had made those choices, which led to the events of the “Battle of the Alamo.” Readers start off by learning why the Mexican army would be getting ready to fight those Texans at the Alamo. Then readers are given their first choice—to fight for Mexico or for Texas. Each path leads readers to discover what happened to various groups of people in this important battle. Readers can fight with Davy Crockett or learn how Santa Ana’s men had to dig trenches, shoot cannons, or fight to get inside the Alamo. The book has many pictures showing real people, places, or scenes scattered throughout the text, which also includes additional facts related to the reader’s choice and the illustration. All of the choices conclude with the overall historic explanation of what happened, a timeline, glossary, and bibliography. This is a great start for adventure seekers who want to discover the adventure in history. Reviewer: Joella Peterson.