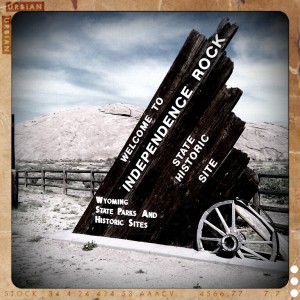 On a roadtrip to South Dakota in 2012, we drove across nearly the entire state of Wyoming. Along the way, we noticed on the map the names of some famous landmarks from US history. One was Independence Rock. Not only did we drive right past it (twice: once on the way there and the other time on the way back), but we also got to stop for awhile and take a few photos on the return trip.

So, exactly what is Independence Rock? Well, according to a guide at a nearby historical monument, this rock was a landmark that the pioneers would have looked for on their westward trek. They knew that they had to be to this rock by at least Independence Day (July 4th) if they wanted to make it all the way to Oregon or California before winter hit. Many Independence Day celebrations occurred at this rock. And, many “half-way” celebrations also occurred since this spot really did mark the halfway point in most of the migrants’ journeys. Apparently, people would carve their names onto the rock! I didn’t realize this until I got home and did some more research because oh how cool that would have been to see that for myself. Some of the names and dates inscribed on the rock go all the way back to the 1820s! Father Peter J. DeSmet is credited to have dubbed the rock “The Great Register of the Desert” because it contained thousands and thousands of names of people who had made the great westward migration. Many of my ancestors were part of this courageous group of people who traveled thousands of miles across the plains to help forge settlements in the great American West. I wonder if any of them took the time to carve their names into this giant rock!?

Just near Independence Rock are many markers that designate the spot where the Oregon Trail, California Trail, Mormon Trail, and Pony Express crossed this desolate western landscape. You can still see the wagon ruts in the trail and as you look out over the landscape can sense that this area holds a very significant can place in our nation’s history. It’s estimated that more than 550,000 people made their way along this trail towards their new homes in the west. I’m so glad I had the chance to see this place for myself! And, I’m even more grateful that I was able to get back into a car and drive home instead of having to walk or ride in a wagon for weeks or months ahead.

Here’s a cool link to find out even more information about Independence Rock!