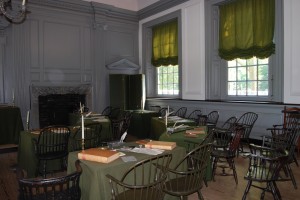 Two years ago, I had the opportunity of being in Philadelphia during the second week of September. I wanted to come here at this time of the year for very specific reasons. I wanted to really feel what it was like in Philadelphia when the Constitution was signed. I wanted to tour Independence Hall and see how the sunlight shone through the windows and cast shadows on the walls. I wanted to feel the slight fall chill in the air and stroll through lanes covered in crunchy leaves. I felt that by doing so, I might be able to have a slight inkling of what it must have felt like to be one of the delegates. I love American history and everything about it, especially the opportunity of being able to visit places that have played a very pivotal role in our nation’s founding.

Recently, I wrote a book on the Constitution. It was one of my most favorite books to research and write because I felt like I was literally transported back in time as I worked on it. I spent hours and hours reading the minutes of the Convention which were laboriously scribed by James Madison. It was fascinating to see what really happened each day of the Convention and to get a better idea of what the delegates were really like and what was important to them as founders of a new nation. The minutes are available to anyone to read. They’re found on Yale’s website at this link: http://avalon.law.yale.edu/subject_menus/debcont.asp

Happy Constitution Day everyone! I’m flying my flag today in honor of the sacrifices made by our Founding Fathers in establishing such a great nation some 226 years ago today.