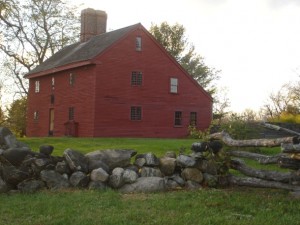 This last weekend, I watched the first episode of NBC’s Who Do You Think You Are?— a genealogy series sponsored by Ancestry.com where celebrities go on remarkable journeys in search of their ancestors. This first episode followed Sarah Jessica Parker as she crisscrossed the country and discovered that her ancestors had been involved in both the California Gold Rush and the Salem Witch Trials.

The latter part of Sarah’s journey was of particular interest to me. Several years ago as I was researching pedigree charts on Familysearch.org, I learned that I was the 10th great granddaughter of Rebecca Nurse—an elderly, infirm woman who had been unjustly accused and subsequently executed during these infamous trials. In fact, when Sarah learns the fate of her own predecessor (Esther Ellwell) in the episode, she was actually sitting in the 17th century red wood frame home of my ancestors, the Nurse family.  Sarah’s reaction to the news of her family’s significant place in American history reminded me of the same feelings I had when I learned of my own personal connection to this tragic era.

In the fall of 2006, I drove from Washington DC to Massachusetts the last weekend in October with the specific purpose of visiting the homestead of my forebears, Francis and Rebecca Nurse. Amazingly, the home is still standing and is meticulously cared for by an area historical society. It was quite remarkable to tour a dwelling that was built and lived in by my own family nearly 300 years before I was born.

As I stood in the home, I thought of the dark cloud that must have passed over the home that day in March 1692 when the family learned of the accusations against their elderly mother. She–like so many other innocent victims of these trials–didn’t really have a chance. The only way out was to point the finger of blame at someone else or falsely admit to wrongdoing—neither was an option for a good Christian woman like Rebecca. After numerous trials and months in jail, she was hung at the gallows in July 1692 for crimes she did not commit.

While at the homestead, I purchased a DVD called Three Sovereigns for Sarah in the gift shop and watched it later that night at my hotel in Plymouth. Based on what I’ve found in my research, it’s one of the most accurate depictions of the Salem Witch Trials available. Highly recommend it.

My trip to Salem was a very interesting one for me. Not only did I gain a greater appreciation of this era of American history, but I also learned more about some remarkable people in my own family tree. Rebecca Nurse was a woman of integrity who wouldn’t lie even if it was to save her own life. I’m proud to say she was my 10th great grandmother.

NOTE: The entire first episode of Who Do You Think You Are? can be found at this link: Sarah Jessica Parker’s Ancestral Journey.