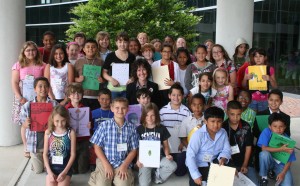 Last fall, I was invited to be one of the children’s authors to present at the University of Central Florida’s Inaugural Book Festival on April 16 and 17, 2010.

Over Christmas break, I autographed approximately 160 books which were to be donated to eight fourth grade classes in two Central Florida area schools. When the students received the books in January, their teachers immediately started them on “author studies.” They read The Battle of the Alamo and also The Backyard Flower Garden For Kids. They completed in-depth lessons and activities on the books and then designed and wrote their own books in one of the two styles. 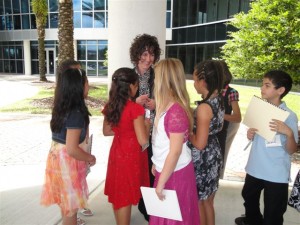 I gave a half-hour presentation four times this morning. I gave specific details about how I wrote the two books that they had already read. Then, I gave them a “sneak peak” at a book that is due to be published sometime this year: An Anatomy of a Plane Crash. They really liked getting to see a book that no one else (except for me and the publisher) had gotten to see yet.

These children were so fantastic! Many of them asked me to autograph the books that they wrote. At one point, I had an entire group of students surrounding me asking me for autographs. I almost felt like Miley Cyrus or something. Wow! So much fun! 🙂

The first day of the festival concluded with an author’s reception at the Barnes and Noble bookstore on UCF campus. Hors d’oeuvres were fantastic and the conversation was enlightening. A very nice evening overall.