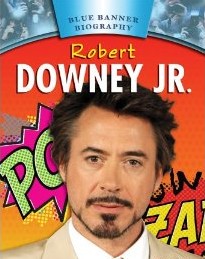 With two parents in the film industry, Robert Downey Jr. was born with acting practically running through his veins. He starred in his first film, Pound, when he was five. During his high school years at SAMO (Santa Monica High School) in the 1980s, Downey Jr. made friends with other up-and-coming stars (Emilio and Ramon Estevez, Charlie Sheen, Sean Penn, Rob Lowe) and with them became known in Hollywood circles as the Brat Pack. Downey Jr. is lauded for his impressive acting talent and his abilities to take on a diverse range of roles ranging from comic book heroes (Iron Man) to famous detectives (Sherlock Holmes). In this book, you’ll journey with Downey Jr. through the ups and downs of his career and personal life.