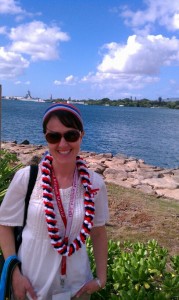 On December 7, 2011, I was extremely fortunate to be able to attend the commemoration of the 70th Anniversary of the bombing of Pearl Harbor as a freelance journalist and photographer. To be honest, the word fortunate is really an understatement of how lucky I feel for being able to be in attendance that day. Standing there that morning by the media platform with the other journalists observing the nearly 5,000 people in attendance, I felt like I was not only a part of history but a recorder of it. I really do count this day as one of the most amazing events I’ve ever been able to attend.

The day was picture perfect. Emerald green palm fronds framed the brilliant blue waters of the harbor. The aqua blue sky was painted with puffy white clouds. From the back lawn of the Visitors Center (where the ceremony took place), we could see both the ivory-white Arizona Memorial and the blue-gray USS Missouri floating in the harbor. As I stood there, I could picture what the day was like 70 years before in the early morning hours of December 7, 1941 when all of the battleships still floated peacefully in the harbor. I have been to Pearl Harbor numerous times in the past and there is always a special feeling here. But this day was different. There was an enormous sense of peace and reverence here that day that I have never before felt at Pearl Harbor. I could tell that this was the day it all happened–the day that thousands of Americans had lost their lives and thousands more lived on to remind us never to forget the price paid for freedom at Pearl Harbor.

I have a bunch of ideas for magazine articles and even a book that I’m working on right now about Pearl Harbor. I’ll update when I know more about publication dates, etc.

In the meantime, here are some of my most favorite memories of the event:

Serendipitously looking down at my phone at exactly 7:55am and realizing that this was the exact minute, 70 years before, that the bombing started. Then, hearing and seeing the F-22s as they soared overhead in the “missing man” formation. It gave me chills.

Watching the Pearl Harbor Survivors and other military service people proudly standing and singing the National Anthem–many with tears in their eyes. 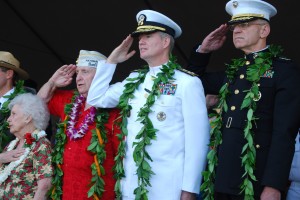 Listening to the President of the Pearl Harbor Survivors Association explain that they were disbanding the organization as of December 31 of this year and with this announcement everyone in attendance sadly realizing that a generation is disappearing before our eyes.

Taking photos of the Pearl Harbor Survivors as they made their way down the “Walk of Honor,” most of them for the last time.

Talking to Pearl Harbor survivors and other service men and women before and after the event. 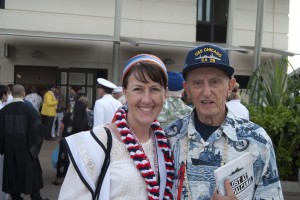 Meeting such wonderful people during the two days that I was in attendance who all have the same goals in mind: Don’t let the world forget what happened at Pearl Harbor on December 7, 1941. 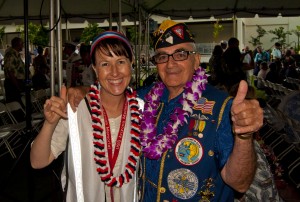 Video I took that day: