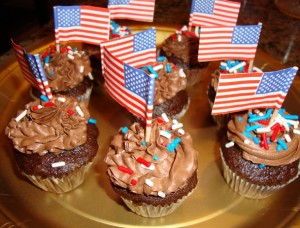 My cousin, Jeff, left for his second tour with the Utah National Guard in March 2010. Last time he went to Iraq and this time he’s going to Afghanistan. We had a going-away party for him on the same day as my grandma’s 80th birthday party. I made these patriotic cupcakes for the occasion.

They were homemade chocolate/chocolate chip coconut zucchini cupcakes with chocolate butter cream frosting. I grew the zucchini in my garden the previous summer and froze the shredded veggie in 2-cup bags.

I found these flag toothpics at a flag store in Provo, Utah called Flags n Stuff. Super nice people there. I also made these cupcakes for a welcome home party for some Olympic Athletes (Heather Richardson, Derek Parra, Lacy Schnoor) during the same week.

Mini cupcakes are starting to be one of my favs to make. Perfect bite-size goodness with less guilt. 🙂

Heat oven to 325 F. Line 2 cupcake pans. In medium bowl, mix flour, cocoa powder, baking soda, cinnamon and salt and set aside. In measuring cup, stir together the milk and vinegar and set aside.

In large bowl, beat butter, oil, sugar on medium-high speed for 3 minutes or until light and fluffy. Add eggs and vanilla; beat until combined. Add milk mixture and beat well.

On low speed, gradually add flour mixture; beat until just combined. Stir in zucchini and 1/2 cup of the chips. Fill liners 2/3 of the way full (about 1/4 cup). Sprinkle with remaining 1/2 cup chips and the nuts.

Bake at 325 for 20-28 minutes or until toothpick comes out clean. Cool completely on wire rack before frosting.