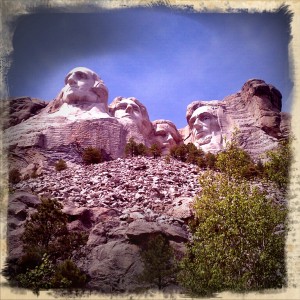 In May 2012, I crossed another item off my “bucket list.” Well, make that two items, actually, because I got to visit  both South Dakota’s Black Hills AND Mount Rushmore all in one fell swoop. Although, I don’t see how it’s possible to visit the latter without visiting the former. 🙂

South Dakota was an amazingly beautiful place–much prettier than I expected. The Black Hills region–with its dense forests and winding mountain roads–is an absolute delight. I pictured South Dakota being just flat prairie land (which I’m sure most of the state actually is), but this area of the state is very mountainous with lush green pine forests, beautiful sparkling blue reservoirs, and interesting jagged mountain formations that made the perfect canvas for Gutzon Borglum’s famous presidential sculptures.

A few people I have known who have visited Mount Rushmore have said that they really weren’t that impressed with monument. They felt that it just seemed so much smaller and insignificant than they expected it would be. Well, my experience couldn’t have been more the opposite. I loved Mount Rushmore the second I laid eyes on it. The workmanship is so amazing. I mean, just think about it. The people who worked on Mount Rushmore dangled over the cliffs on wooden swings and blasted away the rock with dynamite. Then, they chiseled the fine features until they had transformed the jagged rocks into the exact likenesses of four of our beloved presidents. It’s absolutely phenomenal that they were able to do this. I never tired of looking at the monument and wanted to stay there for as long as I could. So did my nephew and my sister!

Some fun facts that I learned while visiting Mount Rushmore: